When it comes to offenses that go so deeply to the fairness of the sport and our ability to trust the results, what the Houston Astros did is right up there on the villain scale.

https://twitter.com/JeffPassan/status/1216796081457111040
That is a massive human punishment for Hinch and Luhnow, the heads of the organization, and then the real hammer is the loss of draft picks. Without a first or second rounder the next two years, it will be extremely difficult for the Astros to land impact talent (both because of the picks and the substantial loss of bonus pool money). The fine, as large as it is, is probably the least potent part of this punishment.

All in all, this is going to be a huge blow to the Astros’ efforts to continue and extend their current competitive window.

Former Astros bench coach Alex Cora, now the manager of the Red Sox, is going to get hammered, too (MLB is apparently holding that for when the Red Sox are punished):

The scheme, laid out by MLB’s investigators, that names Alex Cora:

“Witnesses consistently describe this new scheme as player-driven … with the exception of Cora.” 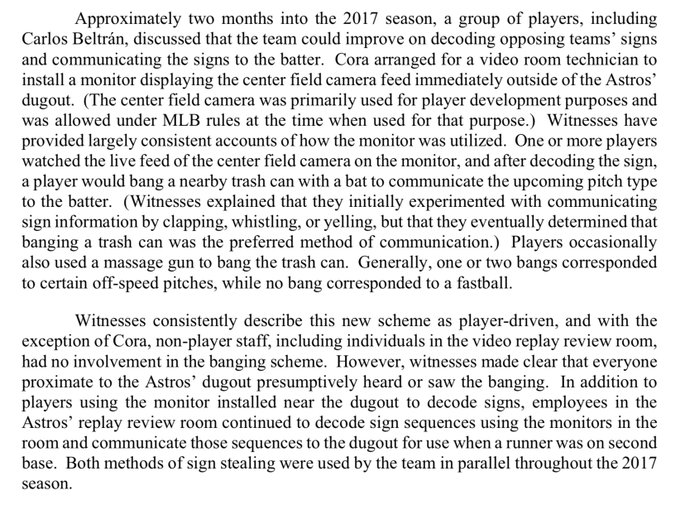 772 people are talking about this

The only complaint you could register with this punishment is that, despite acknowledging that the Astros cheated throughout the postseason in 2017, their World Series win has not been vacated. I can see both sides of that one, but some folks will probably be pissed.

More broadly, MLB had serious problems with the Astros organization on the whole – something that has reportedly been a problem for years:

Now MLB will turn its sights on the Red Sox, who reportedly did their own cheating in 2018, the year they won the World Series. They are likely not the only other team to have cheated using electronic means (even after the Commissioner explicitly warned teams not to do it), but they are the only other team currently under investigation.