On the second night of Lollapalooza 2019, Death Cab for Cutie were joined by a very special local guest during their set. Chance the Rapper hopped onstage for the first live performance of “Do You Remember,” from the Chicago MC’s brand new album The Big Day. 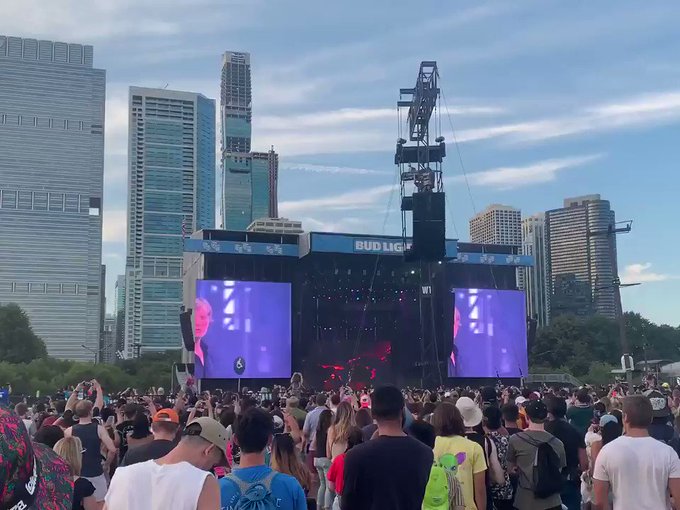 In addition to Death Cab, The Big Dayfeatures a slew of contributors including Randy Newman, Bon Iver, Nicki Minaj, Gucci Mane, CocoRosie, and many others. Shortly after dropping the LP, Chance announced an extensive North American tour in support of the record. The Big Day marks Chance’s debut studio album, as well has his long-awaited follow-up to 2016’s Coloring Book.

’s set, where the rapper and singer Ben Gibbard reunited to perform their Big Day collaboration “Do You Remember.”

“This is our first time ever performing this song and I think this might be a moment in history,” Chance the Rapper

told his hometown crowd before the Friday performance, which came a week after The Big Day arrived on July 26th.

Death Cab for Cutie previously said of the collaboration, one of The Big Day‘s biggest surprises, “It all started with a, well, chance encounter three years ago backstage at Bonnaroo. Turns out that we and @chancetherapper had a bit of a mutual admiration society going on, and we had a very fun hang in our dressing room, in which he revealed a straight-up impressive familiarity with some pretty deep Death Cab catalog cuts, and during which the possibility of a collaboration was briefly mentioned.”

The band continued, “Fast forward to 2019, and we were truly surprised and honored when Chance got back in touch and asked us to be part of a song called ‘Do You Remember,’ which appears on his debut record, THE BIG DAY

, which is out worldwide as of right now. We couldn’t be more thrilled.”

During that “chance encounter” at Bonnaroo

, Chance the Rapper revealed to the band that has a “huge fan,” even altering Death Cab for Cutie’s setlist at the fest to include “I Will Follow You Into the Dark.” The rapper also promised a Death Cab collaboration in the future.